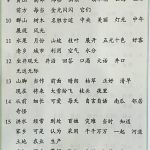 [A redacted and edited version of this article was published in the China Daily] Nowhere is man freer than on the field of battle, where it is a matter of life and death, wrote Leo Tolstoy in War and Peace. One way of determining people’s morality is by observing their reactions during a crisis. Western audiences have offered three types of reactions to the recent virus … END_OF_DOCUMENT_TOKEN_TO_BE_REPLACED

A couple of weeks ago, Tu Youyou became the first Chinese national to win the Nobel Prize in Medicine "for her discoveries concerning a novel therapy against Malaria."  (Tu had already won the Lasker Award a few years ago for the same work, and had described her work this way.)  There were cheers and hopes that with the prize, more people would become aware of Traditional … END_OF_DOCUMENT_TOKEN_TO_BE_REPLACED

So it looks official now, Hong Kong's Legislature has officially rejected the Election Reform promulgated by PRC’s Standing Committee of the National People’s Congress. (For more on this topic, see this previous post late last year)  The central government has responded that the election rules stands and now it is the hope of many that Hong Kong will continue to find a way to … END_OF_DOCUMENT_TOKEN_TO_BE_REPLACED

Recently, I had an interesting debate about the "Tiger Mom" culture in Asia, against the backdrop of a Chinese American mother who criticized the Tiger Mom's suppression of children's "autonomy".  So, since we had lively discussions of this subject here, … END_OF_DOCUMENT_TOKEN_TO_BE_REPLACED