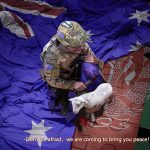 [This piece is cross-posted at theSaker. A "more polite" version has been published at AsiaTimes.] I have picked on America for some time … and for good reasons … because American leaders and media on the world stage have been tragically hypocritical and arrogant for too long. Just look at the recent murder of Iran's top nuclear scientist - Mohsen Fakhrizadeh. Imagine … END_OF_DOCUMENT_TOKEN_TO_BE_REPLACED

Nathan Rich has been putting out many incredible commentaries on China on Youtube for the last few years. And this most recent one on Dr. Li's death certainly ranks among the best commentaries I have seen in English (or Chinese even) on Dr. Li's death in Wuhan. Dr. Li was one of the earliest doctors to notice a SARs like virus going around in Wuhan and had "tweeted" about … END_OF_DOCUMENT_TOKEN_TO_BE_REPLACED

Before the "Fake News" became "popular," we were here. This blog was started to counter anti-China fake news created and spread by Western establishments in the lead up to the 2008 Olympics. We were created during the days of ANTI-CNN - now defunct .... and part of April Media according to Wikipedia. In light of the previous posts by Charles Liu and Rolf, I thought I … END_OF_DOCUMENT_TOKEN_TO_BE_REPLACED

Note: This is an update of a previous post, which can be found here. Over this past Summer and Fall, I watched with heightened interest (and much dismay and sadness) the violence that has besieged Hong Kong. Instead of arguing and shouting (there is too much of that already on the streets), I aim to bring you some facts and context about the situation ... as reported by … END_OF_DOCUMENT_TOKEN_TO_BE_REPLACED