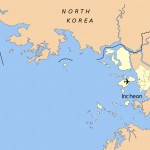 On 26 March 2010, South Korean (ROK) naval ship, Cheonan was sunk 1.9 km off the southwest coast of Baengnyeong Island. 46 of the 104 sailors were presumed killed. South Korea claims the ship was sunk due to a torpedo attack from North Korea (DPRK). "The cause of this explosion was not immediately determined, although experts said that an external explosion was likely, as … END_OF_DOCUMENT_TOKEN_TO_BE_REPLACED