In response to my prior article where I mentioned Napa Valley was destination of the first wave of laborers from China (and later became the driving force behind the Chinese Exclusion Act), reader perspectivehere reminds us there were in fact much more horrifying atrocities against the poor Chinese. perspectivehere digs up a piece of history from February 22, 1860. … END_OF_DOCUMENT_TOKEN_TO_BE_REPLACED

Julia Lovell, in her new book The Opium War: Drugs, Dreams and the Making of China, finds something funny in the tragedy Great Britain has many reasons to feel great about itself. Its empire was the largest in history and covered over a fifth of the world's population. It had more Asian and African colonies than any other European power. It came, it saw, it divided, and it … END_OF_DOCUMENT_TOKEN_TO_BE_REPLACED 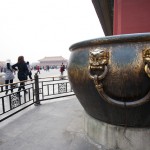 Western travelers will likely wonder why these gold platings were scraped off in water vessels throughout Forbidden City. This is the last visible hint in Forbidden City that still remains today of the European invaders. The Yuanmingyuan (another location) remains in complete ruins as a reminder to the Chinese people. Each time some auction house in the West sells some … END_OF_DOCUMENT_TOKEN_TO_BE_REPLACED