A couple of years ago, I wrote a post about how Germany has cheapened its own history and disregarded its own humanity by turning a blind eye on Japan's horrific crimes against humanity in China on the eve of the 77th anniversary of the Nanking massacre. In that piece, I wrote how Germany may not be preaching "universal values" per se, but politically-expedient political … END_OF_DOCUMENT_TOKEN_TO_BE_REPLACED 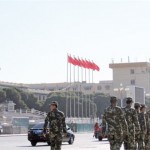 Global Times carried some really good coverage of the recent attacks in Kashgar, shedding light on the tension in the Xinjiang Uyghur Autonomous Region. Rest of this post is really just the Global Times article itself. That one idea I feel deserves still extra mentioning is the fact that people when feeling there is nothing to loose, will tend to engage in more extremist … END_OF_DOCUMENT_TOKEN_TO_BE_REPLACED