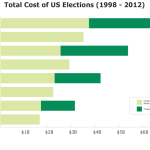 This is a brief note on elections - that bedrock of modern democracy. A key and indispensable pillar of modern democracy - heck modernity - is the notion of elections.  Elections, many believe, are a fundamental way for people to express their voice, and some believe even for people to engage in self-determination as envisaged in the Charter of the United Nations.  Without … END_OF_DOCUMENT_TOKEN_TO_BE_REPLACED

It's a long running joke that many in the West continue to misleadingly characterize China as a police state. In the run up to the Olympics, there are people who mocked Chinese efforts to provide for a safe and successful Olympics - even though massive security efforts now appear to be quite routine in the West (see e.g., 2002 Olympics, 2004 Olympics, 2006 Olympics, 2010 … END_OF_DOCUMENT_TOKEN_TO_BE_REPLACED

Jim Hoge has been the editor of Foreign Affairs magazine since 1992. He holds the Peter G. Peterson Chair at the Council on Foreign Relations, and is a director of Human Rights Watch and the Foundation for a Civil Society. He is also the chairman of the International Center for Journalists. He recently had this to say about China. … END_OF_DOCUMENT_TOKEN_TO_BE_REPLACED

In 1996, Samuel P. Huntington published his famous book, "The Clash of Civilizations and the Remaking of World Order" where he posited after the Cold War, the world is more likely going to have major wars due to civilizational fault lines than anything else. He recognized that the Cold War was a competition between the Capitalist West and the Communist East. Huntington … END_OF_DOCUMENT_TOKEN_TO_BE_REPLACED