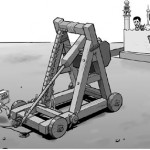 Remember the 1990s and early 2000s hunt for WMD in Iraq headed by the former director-general of the IAEA, Hans Blix? No WMD has been found, but during that period, the propaganda within the NATO countries arguing for war ultimately led to the 2003 Iraq invasion. Now, fast forward to 2011. I get the sinking feeling we are witnessing the repeat of that. Remember the … END_OF_DOCUMENT_TOKEN_TO_BE_REPLACED