This is not the first time I have read and linked to articles in The Asia-Pacific Journal: Japan Focus that I find sensible, instead of the misinformation and disinformation we see so often preached in Western press and Japanese press. I thought this article by Kimie Hara gives a more balanced Japanese view of the issue of territorial dispute between China and Japan and … END_OF_DOCUMENT_TOKEN_TO_BE_REPLACED

The Emperor in Washington has no clothes, laid bare by his naked lies and soon without a feather to fly with. Well, maybe he has P8-Poseidons to conduct provocative flights around Beijing’s South China Seas islands, and a giant nuclear-powered fig leaf spread over 800 known global bases to cover his, uh, security.  But navel-gazing American politicians have already been … END_OF_DOCUMENT_TOKEN_TO_BE_REPLACED

When the story of the Philippines Police arresting Chinese fishermen for illegally fishing sea turtles in Half Moon Shoal broke a few days ago, I immediately read saw in the news that families of fishermen highly doubt the veracity of that story since the fishermen did not leave with equipment to poach turtles... Well, here are a few more details from xinhua. QIONGHAI, … END_OF_DOCUMENT_TOKEN_TO_BE_REPLACED 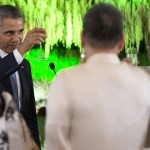 The U.S. and Phillipines leadership would like to portray their new relationship as rosy, strategic and deep.  On the street though, talking to the average Joe, one might get a very different impression. Billed as the cornerstone of growing US and the Philippines strategic partnership and of the U.S. pivot back to Asia, the Enhanced Defense Cooperation … END_OF_DOCUMENT_TOKEN_TO_BE_REPLACED