A couple of years ago, I wrote a post about how Germany has cheapened its own history and disregarded its own humanity by turning a blind eye on Japan's horrific crimes against humanity in China on the eve of the 77th anniversary of the Nanking massacre. In that piece, I wrote how Germany may not be preaching "universal values" per se, but politically-expedient political … END_OF_DOCUMENT_TOKEN_TO_BE_REPLACED

Earlier today, I stumbled upon a curious article in the Washington Post titled "This is why Germany doesn't want China anywhere near Berlin’s holocaust memorial".  According to the article, President Xi was (in short) barred from visiting German's Holocaust memorial in Berlin because Germany was worried about embarrassing Japan. Here is a copy of the article in … END_OF_DOCUMENT_TOKEN_TO_BE_REPLACED

World War II began near an unremarkable town called Wanping, China in July 1937 and ended with soul-destroying fury that ballooned as giant mushroom clouds over Hiroshima and Nagasaki. With two atomic bombs, the United States stuffed the genie of Japanese militarism into the American bottle. Under its watch, post-war Japan has maintained an elegant deception as a beacon of … END_OF_DOCUMENT_TOKEN_TO_BE_REPLACED 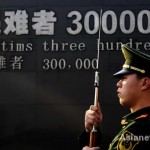 Today marks the 74th anniversary of the Nanjing Massacre, where Japanese soldiers went on a rampage of rape and murder, targeting women and children alike, killing more than 300,000 Chinese during the brief few weeks when they took over Nanjing, then capital city of the nationalist government. The issue that is perhaps the most contentious between Japan and China is Japanese … END_OF_DOCUMENT_TOKEN_TO_BE_REPLACED