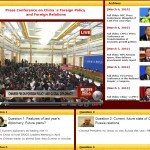 Chinese Foreign Minister Yang Jiechi held a live questions and answers session with journalists detailing China's foreign policy. The session was done in both Chinese and English. I thought Minister Yang was very articulate and Chinese brand of international relations will be well received around the globe. I will highlight some points and also weigh in on the Reuters … END_OF_DOCUMENT_TOKEN_TO_BE_REPLACED

A lot has already been written in the Western media about the yesterday U.S. Secretary of State Hillary Clinton speech on Internet 'freedom.' In her speech, Clinton singled out China for being "repressive" on the Internet, and for that reason, the predictable narrative is out yet again: U.S. vs. 'bad' China, 'bad' China, or U.S. being too harsh to, still, a 'bad' China. This … END_OF_DOCUMENT_TOKEN_TO_BE_REPLACED