The New York Times has an interesting article out which caught my eyes: “Ethnic Differences Emerge in Plastic Surgery.” It is a pretty good read, actually, in describing how minorities in America in the past and present conform themselves to look more “American.”

Where it left off, I’d like to share a few more observations. During the Tang Dynasty, slightly obese women were considered beautiful. The Hawaiians had that same norm in their history too. RV has just talked about soft power, and in my view, Hollywood and American television have tons of it.

According to the NYT article, apparently Asians are into cutting up their eye lids to get that double lid, big “American” eye look. In this next sequence of images, I’d like to show you why they are doing that in America. Absolutely watch the short video at the end of this post and read my point on it.

But, don’t misconstrue me as saying there is some sort of conspiracy. The Japanese subject themselves into anime looking characters. Some cultures subject themselves to contorting their necks so they look like the ostrich. America subjects her people to big eyes and big breasts. And, it is not always the “tyranny of the majority.” I have White American friends who absolutely abhor their children bringing home inner-city Black lingo.

Blame Dora. I don’t think Mexicans or Hispanics normally have proportionately as big eyes as her.

Blame Kailan. Neither are Chinese girls eyes are as big as Kailan’s. 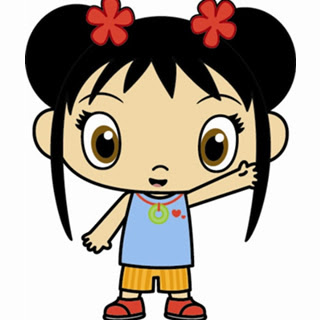 Of course, what has been culturally established is that in order to be cute and “good,” the eyes must be BIG.

Here comes the scary part. If you are Asian, watch how this video teaches Americans how to draw the eyes of a villain: “bit more slanted, bit more evil.”

How does an Asian American combat this? Pray that China becomes super rich so cool movies of the future portray slanted eyes as “good,” “beautiful,” and “sexy.” The big eyes need to culturally tone down a bit. Or slanty eyes in the West need to be made less evil. I say, bet on China becoming rich.

Getting eye lids cut is just too cruel.

[Update February 21, 2011]
I think the comments below are far more interesting than the post itself. Make sure to have a read.