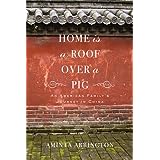 In this delightfully written memoir, “HOME is a ROOF OVER a PIG, an American Family’s Journey in China,” Aminta Arrington details the experiences of her all-American family, from suburban Georgia, fully immersed in language and culture in Tai’an, a relatively poor city in China’s Shandong Province. The title derives from the character, “家,” which Arrington recounts someone explaining to her the top radical means roof and the bottom pig. Embedded in the Chinese characters are history and culture which she found fascinating. Her genuine interest in this ancient culture lead her to adopt a baby girl, and it was out of the desire to want to offer her a bond with her roots that ultimately brought the entire Arrington family to China.

She and her husband taught English at a local university where they mingled with students who came from rural areas as well other cities. Her family visited some of the students. That immersion meant the Arrington children also picking up some local habits, including dropping their pants on the side of the road to urinate. Arrington herself would be perturbed by complete strangers asking her about her salary, and to her own surprise, she succumbs, divulging it. When in Rome do as the Romans do! Her own parents would visit from America and while attending a Sunday morning church service, witness a fellow church goer sitting next to them clearing his throat, spitting, and then smearing it into the bare cement floor with his shoes. There are many such episodes in the book told delightfully.

I cringed and laughed throughout the book. I also felt warmed by the outpouring of hospitality shown to the Arringtons by the Chinese for I know that’s ingrained in the culture.  I was happy to read about their three children thriving, though Katherine took a bit longer to come around.

Arrington completely gets the texture of everyday living correct in this tier 2 city, Tai’an. In my view, there are three types of China’s.  Modern China is represented by tier 1 cities like Shanghai, Beijing, and Canton, with amenities not unlike New York or San Francisco.  Then, there is rural China where majority of Chinese still reside, though their numbers are in a dwindling trend. Remember, China is in the midst of an industrial revolution.  (See my prior article, “‘Father’s Prairie, Mother’s River’ – the feelings of one billion people on the move.”)

The China in-between are represented by tier 2 cities such as Tai’an. That in-between China is where the bulk of the Chinese population modernize, albeit at a less dizzying pace compared to tier 1 cities. That is where the majority of peasants go in pursuit of greater material comforts. McDonalds, Starbucks, and Chinese chain stores will arrive in increasing numbers. It is also where unique customs give way to more popular ones. Eat mantou (steamed buns) or buy a happy meal at McDonalds instead? This is where Mandarin as the national dialect continues to entrench.

The book is also very much about Chinese perspectives, which I eagerly anticipated in each chapter. I credit Arrington for faithfully capturing what her English students or other ordinary Chinese told her when they debated, especially on issues related to ideology or politics.

In discussing her students perspective about individualism and freedom, her husband, Chris, observed that the Chinese simply don’t proclaim those ideas as much as Americans do. She would explain that Confucian values help place one in society and thus there is perhaps less of a need for one to clamor for that heightened sense of unique identity.

Her husband’s observation is the same as Henry Kissinger’s. America view these values with missionary zeal. What is not said is that the Chinese not being zealous about them does not mean the Chinese are opposed to such values.

I was grateful to her attention to detail in faithfully capturing much of what her students said.

Remember though, Arrington is learning Chinese in Tai’an while teaching English. Much of her conversation on abstract ideas with her students were done with their broken English. So, if there is any shortcoming in the book, it is that the Chinese perspectives are not fully obtained. When she is more fluent in Chinese, she should then be able to more fully engage.

Leading up to the 2008 Beijing Olympics, riots broke out in Lhasa. Her students were angry at what they saw as fabrication in the Western media to smear China. Arrington in fact had an Op-Ed written and ready to submit to the NYT arguing why President Bush should not boycott the opening ceremony. She was saddened to read a piece had just published which argued the opposite.

Being a Westerner, she felt it was her responsibility to explain and defend the Western perspective in front of her students. That’s out of the desire to want understanding for both sides of the aisle. Our readers on this blog should know, we aim to do the same by articulating the Chinese perspectives!

“HOME is a ROOF OVER a PIG, an American Family’s Journey in China” is a book on Chinese society that I recommend enthusiastically.

To find out more, visit her web site at: http://amintaarrington.com/