[This article was originally published on Globalresearch.ca.] Japan, China and Taiwan Reports on the Origin of the Virus The Western media quickly took the stage and laid out the official narrative for the outbreak of the new coronavirus which appeared to have begun in China, claiming it to have originated with animals at a wet market in Wuhan. In fact the origin … END_OF_DOCUMENT_TOKEN_TO_BE_REPLACED

Nathan Rich has been putting out many incredible commentaries on China on Youtube for the last few years. And this most recent one on Dr. Li's death certainly ranks among the best commentaries I have seen in English (or Chinese even) on Dr. Li's death in Wuhan. Dr. Li was one of the earliest doctors to notice a SARs like virus going around in Wuhan and had "tweeted" about … END_OF_DOCUMENT_TOKEN_TO_BE_REPLACED

Financial Times recently published an article on how the Chinese government is trying to plan its economy to better adjust to an aging population that is expected to peak in 2050 with around 35% of population over 60. According to the article, this is a culmination of a series of policies actually started at the same time as when the one-child policy was enacted. Compared … END_OF_DOCUMENT_TOKEN_TO_BE_REPLACED 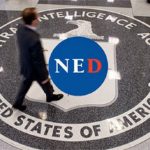 In 2017 the American government funded 48 anti-China groups and organizations through its «National Endowment for Democracy» (NED), – in order oppose and harm China and to create social and ethnic tensions and conflicts inside China. Recently NED has been focusing on Xinjiang, and as a consequence there has been negative reports about the situation there in many Western … END_OF_DOCUMENT_TOKEN_TO_BE_REPLACED