Here's the letter that suddenly gave the Boycott 2022 Olympics crowd renewed impetus, allow them to cheer and jeer about questions of her disappearance and reappearance, what had happened to her, if she was sexually assaulted. Has anyone actually read the letter? Some read it as a love letter actually and the protestant sex shame part Western media is focusing on, is … END_OF_DOCUMENT_TOKEN_TO_BE_REPLACED 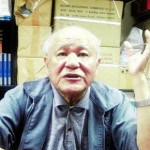 This is the preface of the book titled Memoir of Chen Mingzhong (陈明忠回忆录) written by Lu Zhenghui (吕正惠) who is a university professor at Taiwan Tamkang University (淡江大学), the editor was Lin Na (李娜). Chen Mingzhong has been an activist in Taiwan since the 1950s. I feel that this part of Taiwan's history is so well buried that it needs to be better known. In the following … END_OF_DOCUMENT_TOKEN_TO_BE_REPLACED

(Via The 4th Media, the following is an article on the popular Chinese web site, 环球网 (Huanqiu Web), by 溪兰城 (Xi Lan Cheng), self-described media person in Beijing, translated by Huifang Yu.) During an interview with Atlantic Monthly, Hillary said, “They're worried, and they are trying to stop history, which is a fool's errand. They cannot do it, but they're going to hold it … END_OF_DOCUMENT_TOKEN_TO_BE_REPLACED

Couple months ago first words on the Chinese "Jasmine Revolution" appeared on an overseas Chinese political blog, Boxun, and has since led to much media hysteria in the West. Two individuals have come forth claiming credit for this call. Below is my translation of an article written by a Boxun forum user, 华龙(Hua Long), titled, "政治难民生意来了 谢万军、王军涛抢破头." In English, that'd be, … END_OF_DOCUMENT_TOKEN_TO_BE_REPLACED