Officials from both China and the U.S. have lauded Obama’s recent trip to China as a great success.  While some have criticized the trip for producing little in terms of specifics, one should not casually dismiss the achievements actually made (see U.S.-China Joint Statement). In so many ways, the relationship between U.S. and China has never been closer.

Yet despite the goodwill generated by the trip, there is one sharp difference that festers between the two – and that is the value of the Yuan.  Many in America feel that the Yuan is not only undervalued, but has created a huge trade deficit, setting in motion the current global financial crisis and threatening to prolong the current U.S. recession.

Many in China feel that the U.S. is unfairly sending China out to be a sacrificial lamb. The world recession (of which the U.S. recession is a part) was caused by the financial crisis, which originated in the U.S. as a result of  U.S. mismanagement of its capital market.  Economic prosperity is not a zero-sum game. The U.S. needs to focus on fiscal responsibility and revitalizing its unhealthy financial industry instead of blaming on China for its own problems.

1. What caused the trade imbalance between the U.S. and China?

This is a complicated question.  From a macro-economic standpoint, bilateral trade deficit can arise between two economies only when there is a difference in the savings / investment rates between the countries.  The Yuan peg did not create the trade imbalance. The trade deficit between U.S. and China is a natural consequence of the difference in savings and investment rates between the two economies.

But what does this actually mean?

It means that part of the deficit reflects merely the opportunities – both in terms of labor supply and end market – that China presents to U.S. companies. When a company like GE or GM decides to build a factory in China to take advantage of China’s abundant labor supply or to invest in China to develop stake their claims to China’s rapidly wealthy consumers, these companies move capital into China. That capital flow into China will add to China’s balance of account with the U.S. – even though this is still asset under the control of American companies. Every dollar that is converted to Yuans will end up adding one more dollar to China’s holding of the dollar reserve even though every one of these dollars (plus more if these companies make money in China) can be withdrawn to the benefit of American companies in the future.  Part of the deficit therefore simply reflects the rush of American companies to China to finally service those famed 1 billion+ Chinese consumers – with this rush of capital contributing to (on the accounting books anyway) a decrease in savings in America and a increase in investment in China.

Another part of the deficit reflects the difference in aggregate savings rates (household + government) between U.S. and China.  The following charts shows a long but steady decline in U.S. personal savings over the last three decades. 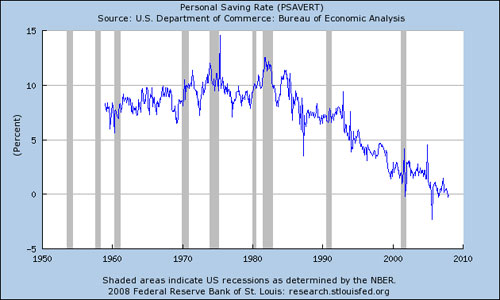 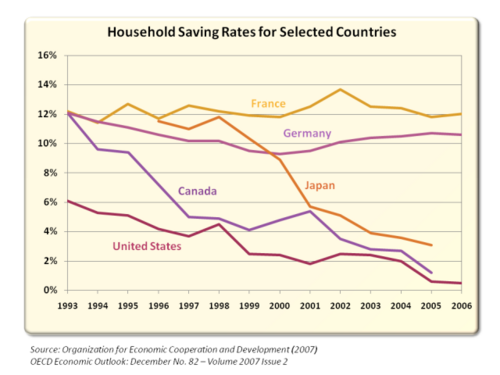 The net result is a progressively widening of the U.S. balance of trade with the world over the last three decades.

It’s amazing to see the close correlation between America’s currency deficit and its drop in aggregate savings rate – though it is not difficult to explain. When Americans spend more than they make, and when others save more than they make, the net result of trade between the U.S. and others will favor others on the whole holding more dollars than before.

Some might say this is all China’s fault.  China artificially depresses its currency and runs up huge foreign reserves to addict the U.S. to cheap products and cheap credit. But the fact is that China did not always have a cheap currency. During the Asian Financial Crisis for example, China was actually lauded for keeping the value of its currency high while the rest of the currencies in Asia went into a nose dive.  Yet throughout that time, the overall U.S. trade deficit continued to grow. China also did not always have a huge dollar reserve to “addict” the U.S. government with cheap loans. The U.S. government deficit has actually grown steadily since the 1980’s, long before China started lending massive amounts of money to the U.S. Even today, China holds only about  6.7% (about $800 billion) of the total U.S. debt of $12 trillion. It is disingenuous to hold China responsible for U.S. government’s spending habits.

As can be seen, the percentage of U.S.’s trade deficit with China has bounced back and forth around 35% of its overall deficit for much of that last two decades. Whatever issues the U.S. has with China, it also seems to have similar problems with the rest of the world.

2. Did the trade imbalance between U.S. and China cause the financial crisis?

I tried to answer this question in a recent post here on Foolsmountain.  I still stand by what I said.  The financial crisis was a recent phenomenon caused by a mixture of questionable U.S. domestic policies on housing throughout the 2000’s, the easy money supply the Fed fomented in the aftermath of September 11, and an under-regulated U.S. financial market that fed on the previous two to create a major housing bubble.  The financial meltdown in the U.S. exported a financial crisis, and then a recession, to the rest of the world.  The current problem in the U.S. financial industry is a separate and distinct issue from the more long-term issue regarding the balance of account (savings / investment) that the U.S. has had with the rest of the world for much of the last three decades.

In some ways, I suppose the yuan (or the rupeee, or the peso) does cost U.S. jobs.  Due to the low costs of doing business abroad, the U.S. no longer has a major textile industry; much of the call center business has been outsourced to India; major electronic fabrication facilities now resides in Asia rather than in America.

But on the other hand, the loss in jobs is supplemented by opportunities in other fields. With the advent of the industrial and later information age, many traditional jobs also disappeared. Yet, for society at large, the benefit of the transformation outweighed the bad. Society became more productive; people’s standard of living increased. The same can be true of globalization.

America has the best scientists and most innovative engineers, the hippest designers, the most advanced high-tech industries, and most developed expertise in law, medicine, finances (the financial crisis not withstanding). Outsourcing lower-value work to developing countries while re-deploying its resources to higher value ones is not a bad deal for America.

But doesn’t an artificially weak yuan steal jobs from the U.S.?

I don’t think so. The economies of China and U.S. are surprisingly complementary. Few companies directly compete with each other. When the yuan is weak, China will have to ship more t-shirts, toys, computers, cameras, etc. to the U.S. to buy each Boeing airplane or hire each architecture team to design one of its sky scrapers. China’s cheap labor is an asset, not a liability, to the U.S. Stalwart companies like Boeing and GE become more competitive by procuring parts from all over the world, including components from China, instead of buying only American. American workers benefit when the U.S. imports from China, and their daily cost of living is reduced.  The question forward should not be whether China is an asset or liability to America, or even how to model the American economy to be more like China’s, but how to leverage the unique strengths of America to create a better future for America.

4. Why doesn’t the Chinese government allow the RMB to float?

I believe over the long term, the Chinese government will work to allow the RMB to float. Currently the Chinese financial institutions are still at an infantile state of development. There is still wide-spread resistance against making the RMB freely floating and be subject to currency speculations such as those that brought down so many currencies in the Asian Financial Crisis.

China is also concerned that a sudden increase in the RMB will kill its economic recovery. 7.8% of its economy by GDP is involved in the export business (according to this summary in the wikipedia, exports of goods/services accounts for 39.7% of gdp, imports of goods/services accounts for -31.9% of gdp).  Even if raising the RMB might be good for its overall economy (especially as it scours the world for resources and assets to purchase), China cannot risk placing its export industry in jeopardy.

As China works to decrease its dependence on exports, it will eventually find it politically unpalatable not to allow the RMB to float.  There are so many benefits – including making the RMB  one of the reserve currencies of the world. But before that is to happen, China will first have to beef up its financial industry.  Perhaps starting as soon as next year, we will see the RMB begin to appreciate steadily and gradually.  Whether that will actually reduce America’s currency imbalance depends however on a number of other factors – including whether the U.S. reduces its aggregate debt and opens up its economy for Chinese companies to invest (allowing for capital to flow back to the U.S.).

5. Would an upward revaluation of the Yuan help to lift the U.S. economy out of the current recession?

I don’t think so. Does the U.S. expect to export more products to China with a stronger Yuan? Does Boeing, for example, expect to sell more planes to China if the RMB appreciates? I haven’t read about reports of China not buying from America because it has run out of money.

Even if a revaluation does stimulate the flow of goods and services from certain sectors of the U.S. economy to China, a revaluation would not necessarily be good for the overall American economy. A wide range of goods and services imported from China on which businesses and consumers depend in the U.S. will all of a sudden become more expensive. Whether these will in the aggregate serve to stimulate or choke off growth for the U.S. economy is hard to tell.

Personally, I don’t think the main impediment to the recovery of U.S. economy is China or the Yuan. The most important intermediate-term issue is to clean up America’s financial health. Too many banks still hold bad assets on their books. Too many houses are still too bloated in value. The result is that banks become too afraid to lend, and consumers become too meek to spend. The government now steps in with a stimulus package, but unless that leads to economic growth, it will only wrack up more debt, which does not portend well for the future. Unless America’s financial system is cleared (it won’t be easy, but it must be done), the U.S. economy can’t truly recover.

In the longer term, the U.S. must re-learn to spend less and save more. The U.S. was able to prosper going into debt for so long because of the incredible faith the world placed in the U.S. economy, the status of the dollar as the world’s reserve currency, and the many innovations the U.S. made in its financial market (the current crisis not withstanding) to allow its economy to more efficiently allocate capital.  However, the massive currency imbalance it incurred with the rest of the world will not be sustainable indefinitely. In the future, the U.S. must again learn to live within means – to balance the government budgets and increase the personal savings rate.

The U.S. is still by far the biggest, and the most dynamic economy in the world. Its creation of and participation in the global market has brought it – and the rest of the world – amazing wealth. Globalization is not dead. There is much work to do, but the future should be – has to be – bright.

4. Why doesn’t the Chinese government allow the RMB to float?