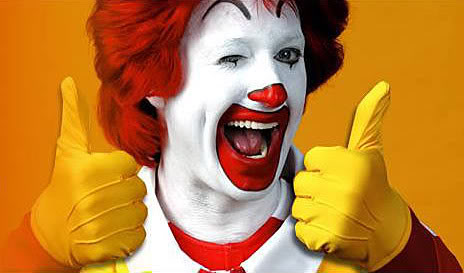 Recently, a series of photographs showing a white American man in China giving an old woman some of his fries have caused a stir in China. Being opportunists, the western press could not contain themselves so as to use this incident in order to show the merciful beneficence of western culture to Chinese. This gloating huffington post article for example could not help but compare this act of McFry magnanimity with the callous behavior of Chinese public in leaving a child to die in the street (also see here for similar self-satisfied, supercilious reporting of this incident).

California native Jason Loose was only buying a poor Chinese woman some French fries, but his altruism has managed to spark a a national debate about the moral corruptness of Chinese society.

Loose, a 23-year-old intern at a sports brand company in Nanjing, told the Los Angeles Times that he bought the woman some food because “there wasn’t much money in her collection bowl and it was really hot out.” A passersby caught the random act of kindness on camera and the story went viral on Chinese microblogging sites. He’s now known as the “French Fry Brother,” Xinhua News Agency reports.

The photos show Loose chatting with the homeless woman, giving her food, and pouring water into her glass. He told Xinhua he was surprised to be called a hero — but has been told by friends the images resonated with a growing social apathy in China.

“It was such a heartwarming scene, but brought by a foreign young man,who offers his love, care and trust to a stranger in need,” username Hunlizhuchiquhui wrote on China’s Twitter-like micro-blogging site, Sina Weibo, according Xinhua. “It makes me reflect on whether I could do what he does.”

Loose told the the L.A. Times he only stayed with her for a few minutes — but before he left, asked an important question should he see her again:

“I asked what’s her favorite food to eat?” he said. “Her answer was ‘not French fries.’”

A recent slew of incidents have highlighted the breakdown of social concern in China: In October last year, a two-year-old was repeatedly run over by cars and ignored by passersby on a busy market street.

The message is loud and clear. Whites are the type of people that share their fries with poor and old people while the Chinese like to watch children die in the street. No mention of more relevant and recent comparisons such as this incident involving what appears to be the attempted rape of a girl on the street by a British man (since that would put westerner in a poor light). The media could have taken the high road, made this story more noble, and looked at this as an act that shows that this is an example that not all foreigners are like the British man or the Russian train rider but it instead goes on the attack.

Why is this even a story that the west is focusing on? Aren’t there comparable acts of kindness that take place everyday involving people of all ethnicities and nationalities in all countries? But none of those likely involve the symbolism that the western media loves. McDonald’s is a symbol of American culture. The beneficence of a white man sharing some wholesome good ol’ American McFries  with a homeless Chinese woman makes western audiences feel good when that image is contrasted with the mainstream media images of heartless, subhuman Chinese.

The bottom line is that such comparisons just makes white people feel good. But what it shows me is a sign that the Chinese public who have took to this simple act of kindness as something deeper is far more magnanimous with regard to their according humanity to foreigners than those foreigners are willing to accord to the Chinese.